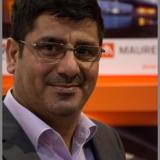 Raad Hamood studied Mechanical Engineering at the Technical University of Munich in Germany and got his (Dipl.-Ing. UNIV) degree in 1991. His Master’s degree was in the field of engineering mechanics and analysis of surfaces deformation of elastomeric materials with Finite Element Method (FEM) and development of new machine element “MAXL”. From 1993 till 2000 he was the Project Engineer for the University of Neubiberg in Germany in the field of technical mechanics and Construction. In 2001 he became the Construction and analysis Engineer for the company SGL Carbon in Germany. From 2004 till 2007 he was the Sales Manager at MAURER SE in Germany-Munich for the Middle East. Since 2008 he has been the Middle East & North Africa Sales Director there.

Check out the incredible speaker line-up to see who will be joining Raad.