Ageing Japan: Robots role in the future of Aged Care 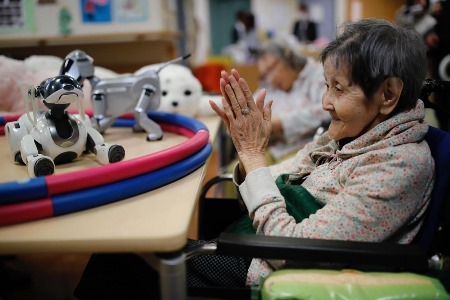 Robots have the run of Tokyo's Shin-tomi nursing home, which uses 20 different models to care for its residents. The Japanese government hopes it will be a model for harnessing the country's robotics expertise to help cope with a swelling elderly population and dwindling workforce.

Allowing robots to help care for the elderly - a job typically seen as requiring a human touch - may be a jarring idea in the West. But many Japanese see them positively, largely because they are depicted in popular media as friendly and helpful.

"These robots are wonderful," said 84-year-old Kazuko Yamada after the exercise session with SoftBank Robotics Corp's Pepper, which can carry on scripted dialogues. "More people live alone these days, and a robot can be a conversation partner for them. It will make life more fun."

Plenty of obstacles may hinder a rapid proliferation of elder care robots: high costs, safety issues and doubts about how useful - and user-friendly - they will be.

The Japanese government has been funding development of elder care robots to help fill a projected shortfall of 380,000 specialised workers by 2025.

Despite steps by Japan to allow foreign workers in for elder care, obstacles to employment in the sector, including exams in Japanese, remain. As of the end of 2017, only 18 foreigners held nursing care visas, a new category created in 2016.

But authorities and companies here are also eyeing a larger prize: a potentially lucrative export industry supplying robots to places such as Germany, China and Italy, which face similar demographic challenges now or in the near future.

"It's an opportunity for us," said Atsushi Yasuda, director of the robotic policy office at the Ministry of Economy, Trade and Industry or METI. "Other countries will follow the same trend."

More than 100 foreign groups have visited Shin-tomi the past year from countries including China, South Korea and the Netherlands.

A few products are trickling out as exports: Panasonic Corp has started shipping its robotic bed, which transforms into a wheelchair, to Taiwan. Paro is used as a "therapy animal" in about 400 Danish senior homes.

The global market for nursing care and disabled aid robots, made up of mostly Japanese manufacturers, is still tiny: just $19.2 million in 2016, according to the International Federation of Robotics.

But METI estimates the domestic industry alone will grow to 400 billion yen ($3.8 billion) by 2035, when a third of Japan's population will be 65 or older.

"It's potentially a huge market," said George Leeson, director of the Oxford Institute of Population Ageing. "Everyone is waking up to their ageing populations. Clearly robotics is part of that package to address those needs."

To nurture the industry, the government is using a two-pronged approach. METI is promoting development, providing 4.7 billion yen ($45 million) in subsidies since 2015.

The labour ministry is spearheading the spread of robots, and spent 5.2 billion yen ($50 million) to introduce them into 5,000 facilities nationwide in the year that ended last March. There is no government data about how many care facilities use robots.

Government officials stress that robots will not replace human caregivers."They can assist with power, mobility and monitoring. They can't replace humans, but they can save time and labor," said METI's Yasuda. "If workers have more time, they can do other tasks."

Most of the devices look nothing like the popular image of a robot. By the government's definition, each has three components - sensors, a processor and a motor or apparatus.

Panasonic used government aid to develop Resyone, a bed that splits in two, with one half transforming into a wheelchair. Cyberdyne Inc's HAL - short for Hybrid Assistive Limb - lumbar type is a powered back support that helps caregivers lift people.

Those needing walking rehabilitation can grab hold of Tree, made by unlisted Reif Co, which crawls along the ground, showing where to place the next step and offering balance support.

But some workers find Pepper difficult to set up, said Shohei Fujiwara, a manager at SoftBank Robotics, a unit of Internet conglomerate SoftBank Group Corp. They'd like Pepper to respond to voice commands and move around independently - functions that SoftBank hopes to introduce this year, he said. 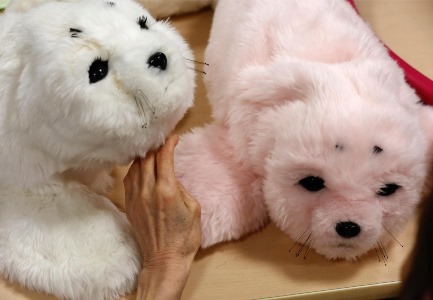 Cute, furry and responsive, Paro reacts to touch, speech and light by moving its head, blinking its eyes and playing recordings of Canadian harp seal cries.

"When I first petted it, it moved in such a cute way. It really seemed like it was alive," giggled 79-year-old Saki Sakamoto, a Shin-tomi resident. "Once I touched it, I couldn't let go."

Paro took more than 10 years to develop and received about $20 million in government support, said its inventor, Takanori Shibata, chief research scientist at the National Institute of Advanced Industrial Science and Technology. About 5,000 are in use globally, including 3,000 in Japan.

Most facilities using them, including Shin-tomi, have relied on local and central government subsidies to help cover the costs. Individuals can also use nursing care insurance to help cover approved products, but those numbers are tiny.

And so far, the robots have not reduced Shin-tomi's personnel costs or working hours.

"We haven't gotten that far yet," said Kimiya Ishikawa, president and CEO of Silverwing Social Welfare Corp, which runs Shin-tomi. "We brought them in mostly to improve the working environment, keep staffers from getting back injuries and make things safer."

What they have done, he said, is boost the morale of both staff and residents.

"That's brought a peace of mind among the staff and the residents feel supported," he said.

This article was originally published by Reuters on the 28th March 2018. [Original Link]

PARO to the rescue