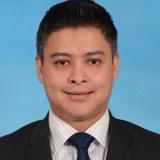 Mohd Azril Fadzli bin Azmi has served in the Royal Malaysian Police (RMP) for 11 years from November 2003 to March 2014. He is a graduate of Universiti Teknologi Mara (UiTM) majoring in Finance. He pursued his post-graduate studies at the Monash University, Victoria, Australia majoring in Banking & Finance sponsored by the Malaysian Government under the ‘Hadiah Latihan Persekutuan’ – HLP scholarship in July 2009 and graduated in December 2010. During his career with RMP, he has served 2(two) departments namely Crime Investigation Department (CID) and Commercial Investigation Department (CCID). He has solved major public interest cases and attended courses organised locally and by international police namely the Royal Canadian Mounted Police. He was conferred with the ‘Pingat Kedaulatan Negara’ – PKN in 16 August 2017 as a form of recognition for his service whilst with RMP. On professional accreditation, he is a Certified Fraud Examiner (CFE), Certified Investigation Specialist (CIS) and Certified Integrity Officer (CeiO). At present, he assumed the role of Vice President Fraud Management Division a newly established function of Bank Kerjasama Rakyat Malaysia Berhad. He is a man of a pleasant character and of high integrity, well versed in financial crime investigation and had demonstrated a history of professional working experience in both public and corporate sector.

Check out the incredible speaker line-up to see who will be joining Mohd Azril .