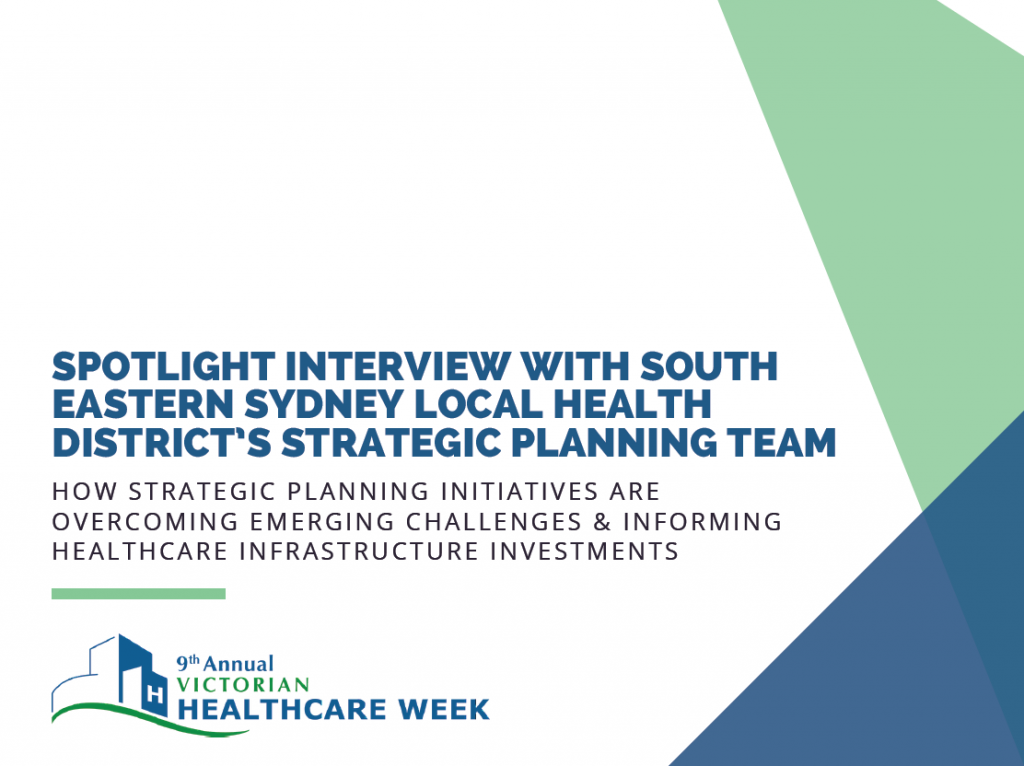 Ahead of the Health Facilities Design and Development Summit 2019 we chat to Julie Dixon, Director Planning, Population Health and Equity as well as Health Planners, Wendy Uptin and Alison Sneddon from the SESLHD’s Strategy and Planning Team. In this article Julie, Wendy and Alison discuss how the planning team is developing integrated health service plans to inform capital developments which focus on shifting care into the community and ensuring patients receive care in the right care setting. 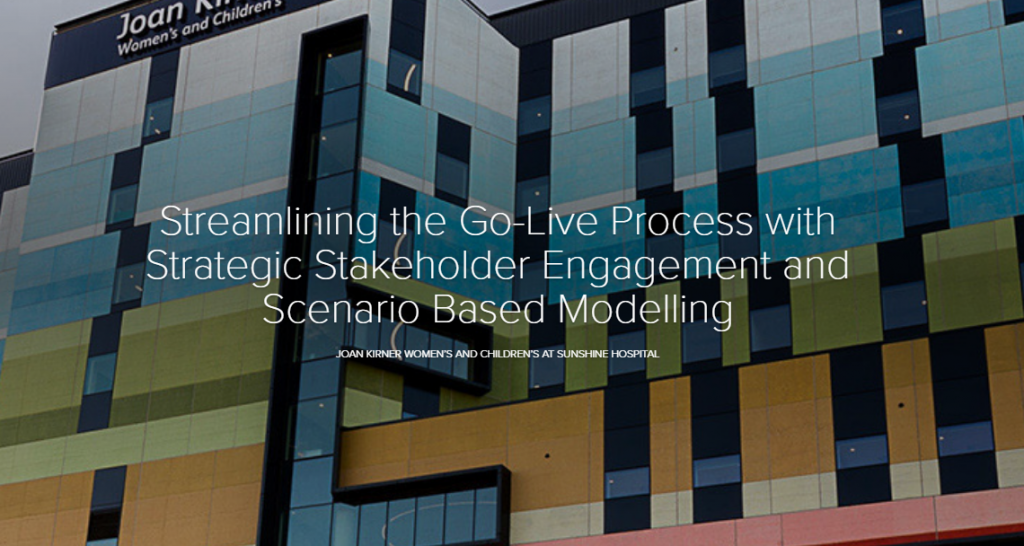 On May 15th (2019) Western Health moved 137 patients into the new Joan Kirner Women’s and Children’s at Sunshine Hospital in Melbourne’s West.

Honouring the legacy of Victoria’s first female Premier, the $200 million Joan Kirner Women’s and Children’s facility will offer local women and families in Melbourne’s west  a modern maternity and paediatric services environment and will feature the western suburbs’ first ever neonatal intensive care unit to care for critically ill babies.

With over 230 beds in new and refurbished areas, there will be an increase in maternity and paediatric beds – giving Western Health the room they need to grow and meet future demand, with the numbers of births at Sunshine Hospital expected to exceed 7,000 a year by 2026, and allowing more women in Melbourne’s west to give birth and access children’s services closer to home.

We recently caught up with Natasha Toohey, Executive Director of Operations at Western Health to chat about the project. Natasha led the commissioning and patient move for the new building.

Here Natasha shares the strategy that made moving 137 patients seamless and the vision allowing Western Health to deliver superior patient experiences in Melbourne’s west for decades to come. 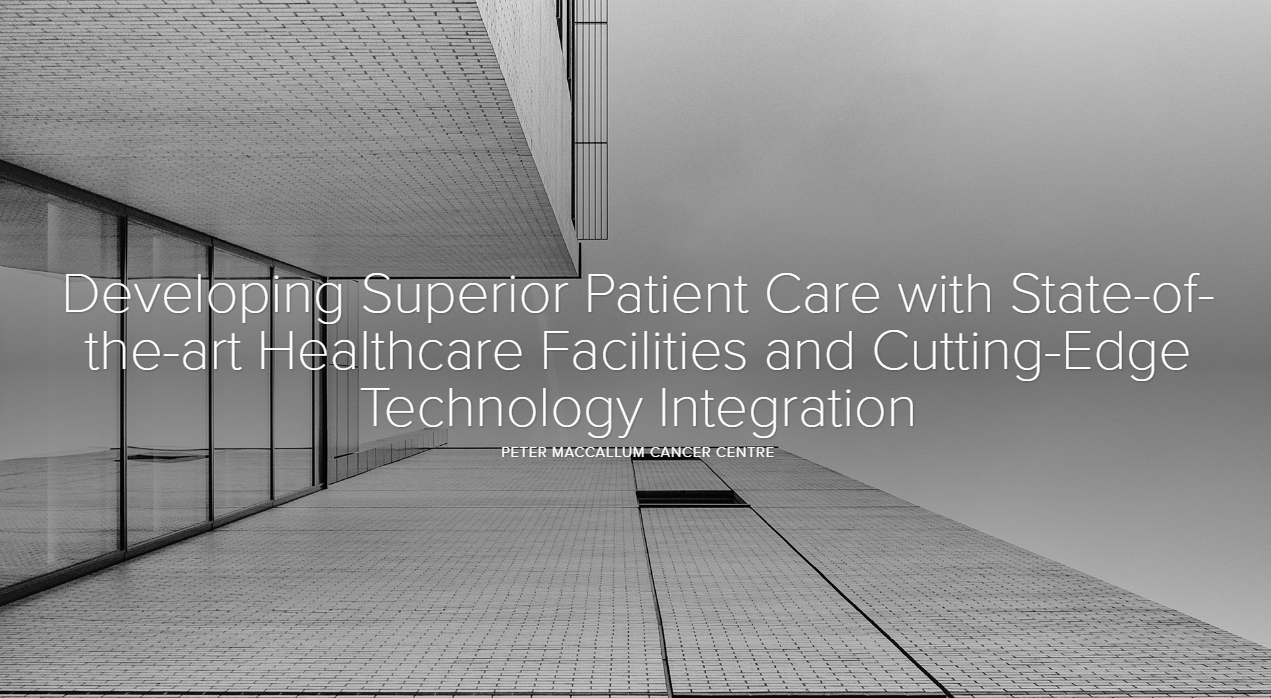 Ahead of Victorian Healthcare Week and the Health Facilities Design & Development Summit 2018 we caught up with Dale Fisher, Chief Executive of the Peter MacCallum Cancer Centre (Peter Mac). In this article Dale shares detail of the innovations integrated within the new VCCC and delves into how this state-of-the-art facility is providing superior patient care and accelerating research by fostering collaboration amongst world-class cancer researchers. 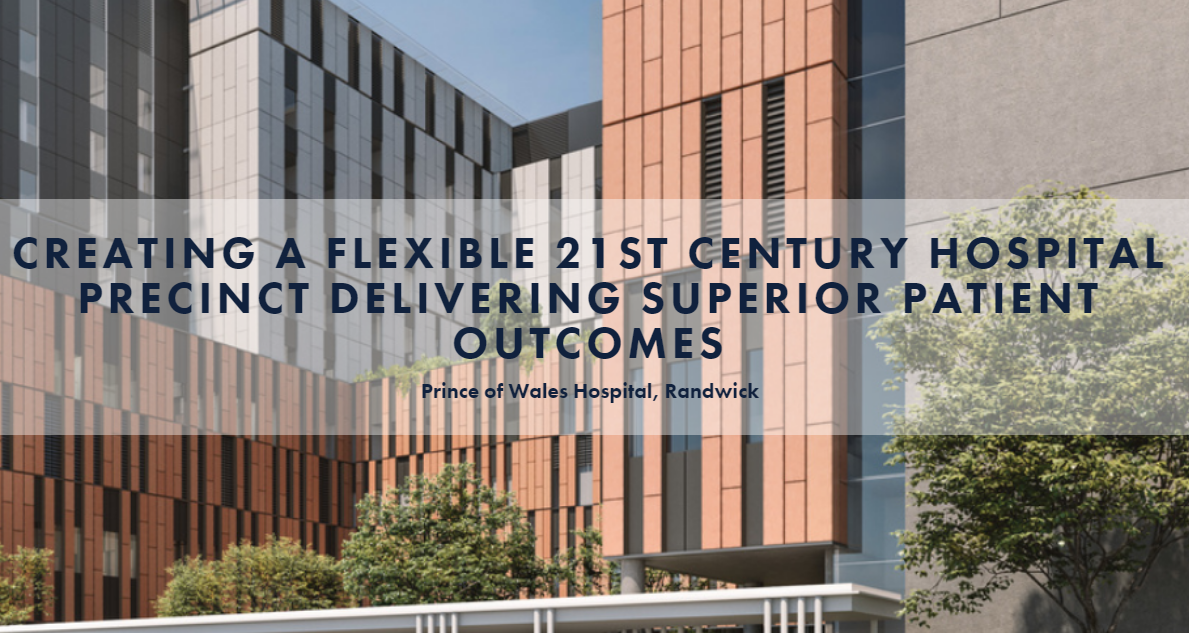 Ahead of Health Facilities Design and Development, and Victorian Healthcare Week 2018 were Tobi Wilson, General Manager at the Prince Of Wales and Sydney Eye Hospitals will present a session, we take a look at the $720m redevelopment and delve into how the precinct is working to become a flexible, accessible and collaborative 21st Century hospital precinct that will deliver superior patient care well into the future. 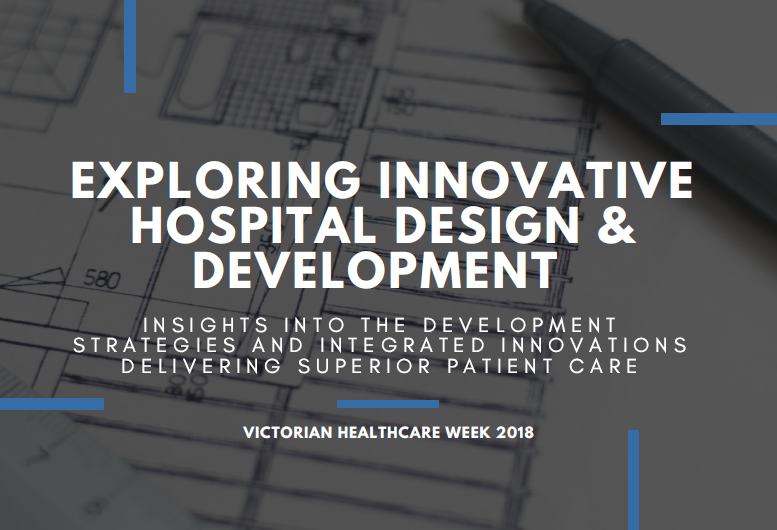 In this ebook, we look at some of the most exciting and innovative hospital projects currently under development and explore how these projects are improving healthcare outcomes through the integration of new models of care, new technology and new project delivery methods.

Read the eBook to learn how.... 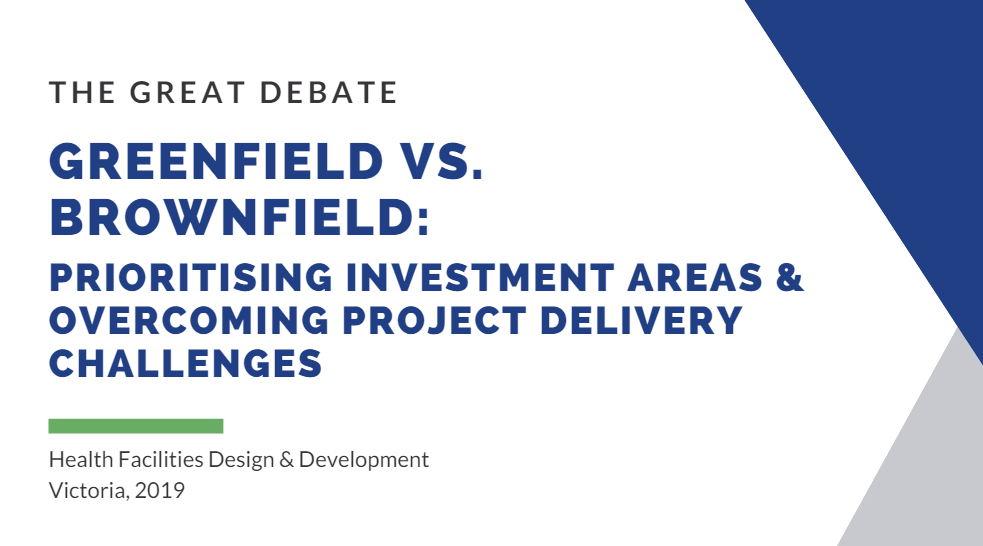 Ahead of Health Facilities Design and Development 2019  (running as part of Victorian Healthcare Week 2019) we bring you The Great Debate - a new format for our Victorian audience – bringing together four healthcare leaders from across Australia to discuss, debate and decide on one of facility design and developments biggest questions; how do we prioritise investment funding, resources and timing to deliver superior patient experiences? 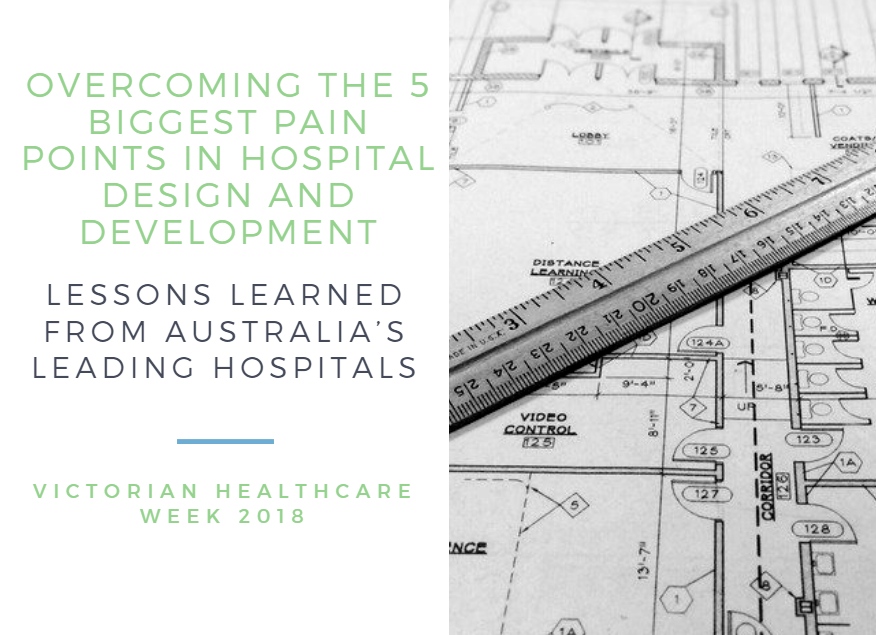 Ahead of Victorian Healthcare Week and the Health Facilities Design & Development Summit 2018 we take a look at some of the nation’s latest and greatest health facility projects and explore how project teams worked strategically to overcome design, development and delivery challenges. 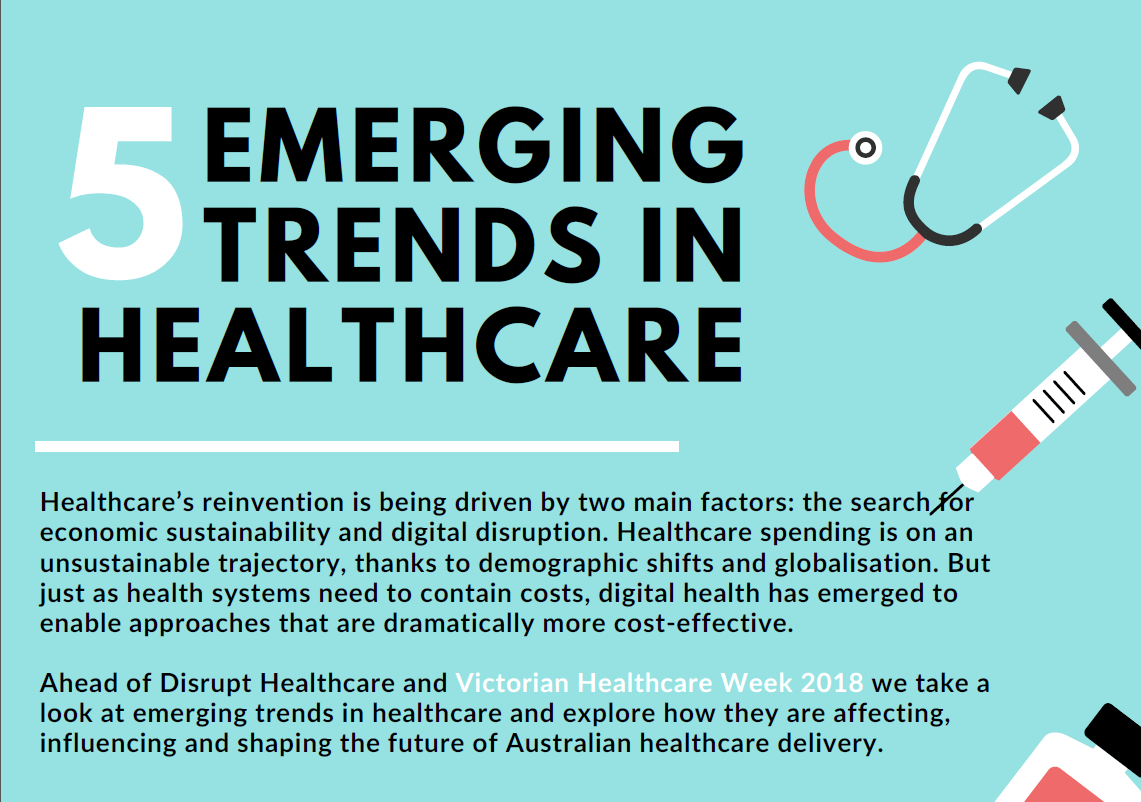 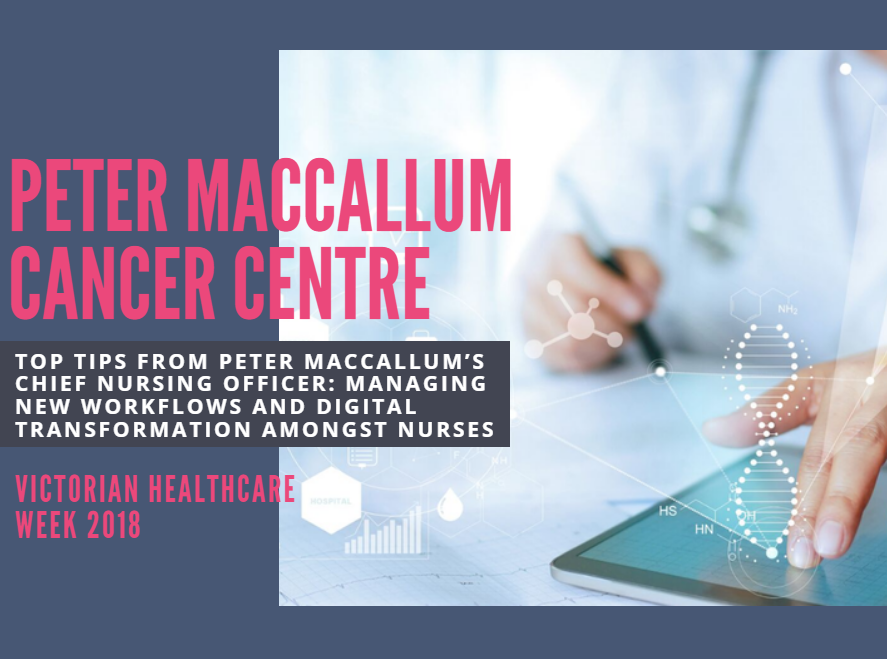 Ahead of Victorian Healthcare Week 2018 we chat to Jac Mathieson, Chief Nursing Officer at the Peter MacCallum Cancer Centre (Peter Mac). In this article Jac shares with us insights into Peter Mac’s digitisation journey, which includes the implementation of EMR and the upskilling of nursing staff, and delves into her lessons learned for seamless change management amongst nurses.