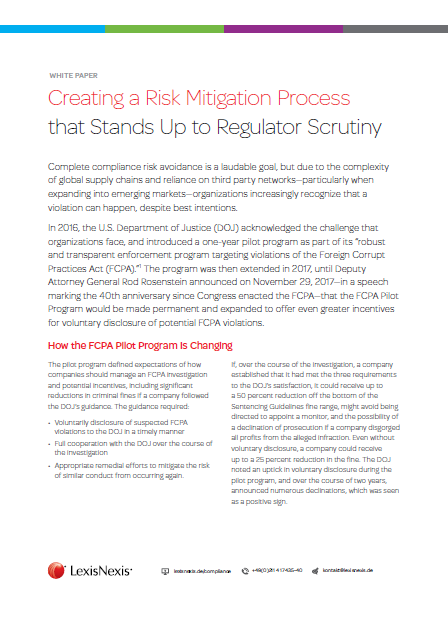 Creating a Risk Mitigation Process that Stands Up to Regulator Scrutiny

Complete compliance risk avoidance is a laudable goal, but due to the complexity of global supply chains and reliance on third party networks – particularly when expanding into emerging markets – organizations increasingly recognize that a violation can happen, despite best intentions.

In 2016, the U.S. Department of Justice (DOJ) acknowledged the challenge that organizations face, and introduced a one-year pilot program as part of its “robust and transparent enforcement program targeting violations of the Foreign Corrupt Practices Act (FCPA).” The program was then extended in 2017, until Deputy Attorney General Rod Rosenstein announced on November 29, 2017 – in a speech marking the 40th anniversary since Congress enacted the FCPA – that the FCPA Pilot Program would be made permanent and expanded to offer even greater incentives for voluntary disclosure of potential FCPA violations.

Companies must design an effective compliance strategy to comply with the ever-changing FCPA program.

Please note: That all fields marked with an asterisk (*) are required.